THE MISSION OF MUSIC IN COMMON IS TO STRENGTHEN, EMPOWER, AND CONNECT COMMUNITIES
THROUGH THE UNIVERSAL LANGUAGE OF MUSIC

Music In Common is a non-profit organization that repairs the fractures dividing communities worldwide. Our programs facilitate dialogue, collaborative songwriting, multimedia production, and performance, and bring diverse youth and their communities together, empowering them against hate. We cultivate compassion and empathy through social-emotional learning and sharpen leadership and peacebuilding skills through our unique peer-to-peer methodology. In any community, our programs transform apprehension into trust, fear into acceptance, powerlessness into action. Working together, participants discover their common ground, expand understanding of each other’s racial, religious, ethnic, socioeconomic and cultural backgrounds, build confidence, wage peace and — yes— change the world. 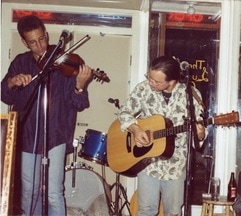 In October 2005, singer-songwriter and producer Todd Mack organized an informal backyard jam in honor of his friend and band mate Daniel Pearl, the Wall Street Journal reporter abducted and murdered by militants in Pakistan in 2002.  Fueled by a resonating belief in the power of music to connect people, that backyard jam grew to become Music In Common, an international non-profit organization with innovative programs that serve as a call to action in communities around the world.

“As Danny traveled the world as a journalist, he’d take his fiddle and play at local jam sessions. It was his way of connecting with people in the places he visited and, then, connecting them with each other.  Music In Common is the best way I know to honor his memory.” – Founder, Todd Mack

​To date, MIC has directly served thousands of people in more than 300 communities across the US, Middle East, and Far East and operates multiple programs locally, nationally, and internationally.

Todd Mack – Executive Director
Todd has made a 30-year career as a musician, songwriter, and producer based upon his unwavering belief in the power of music to change the world. He has toured extensively throughout the United States and Asia as a soloist, with his band, and with Music In Common.  Todd has released 7 CDs of his music and produced dozens of album projects by other artists at his Off the Beat-n-Track recording studio in Sheffield, MA and elsewhere.  Todd speaks locally, nationally, and internationally at universities and conferences on a wide variety of topics related to the music business, music production, songwriting, grassroots promotion, and the power of music to create social change.

Corey-Jan Albert - President - Corey- Jan is a marketing strategist, copywriter, playwright and songwriter. She believes in the power of creative collaboration and communication to solve problems and turn "us vs. them" into "all of us together."

John Van Vlack - Vice President - John spent his career in the corporate world and is now focusing on entrepreneurial ventures and Music In Common. Seeing the great work over the last six years as a Board member, John sees MIC expanding its reach to meet the increasing need for peace. ​

Samir Nomani - Communications Officer - Samir is a recent philosophy graduate from the College of the Holy Cross in Worcester, Massachusetts, who loves songwriting, improvised hip-hop, and poetry. Samir has been volunteering for Music in Common for the past year and is interested in training to be a Music In Common program facilitator. Samir also has aspirations of becoming a psychiatrist, which literally means “healer of the soul." He brings to the table strong organizational skills and a strong commitment to making a difference in the world.

Elizabeth Schroeder - Treasurer - Elizabeth is the vice-president of Plunkett & Associates in Carrollton Georgia.

Todd Mack - Executive Director - Todd has made a 30-year career as a musician, songwriter, and producer.  He founded Music In Common in 2005 based upon his unwavering belief in the power of music to change the world.

Ed Outlaw - Ed is a Tax Credit and Energy Efficiency Consultant, and believer in the idea that cross cultural connections can lead to a more peaceful world.

Dr. Ellen Shanahan - Ellen has been teaching music at Berkshire Community College since 1983.  She is also involved in several arts organizations and works with area high schools and churches to bring performing arts to life.  In 2014, when her music history students first collaborated with Music In Common, she watched them take to heart messages of justice, peace, human rights and collaboration as they created their lyrics, song and video.   She is proud to serve on the MIC Board and would like to see that level of excitement, creativity and caring brought to more students through the work of Music In Common.

Sandra Pantorno - Sandra is a former high school teacher from Suffolk County, Long Island.  With joy for collaboration, an appreciation for our unique backgrounds, and the connections of humanity, she has been an advocate for civil rights most of her life. She believes that Music In Common builds the bridges of peace in a safe environment, helping each person to discover his or her  “best self” within an atmosphere of respect and appreciation for each other.

Dr. Arthur Carlisle - Dr. Carlisle is the president and CEO of Carlisle Chiropractic. Over the past thirty years, he has treated members of the Los Angeles Lakers, Raiders, and Galaxy as well as numerous celebrity comedians, actors and actresses with his innovative approach that blends Eastern and Western medicine. He is proud to serve on the Music In Common Board of Directors and support his son, Trey, and hundreds of Music In Common youth like him world wide.

​Jessica Bartle - Jessica began her career in financial planning in 2012 and is a Financial Advisor at Arista Advisory Group in Great Barrington, MA. In addition to developing and implementing strategies for fiscal growth and sustainability for Music In Commin, Jess enjoys spending time with her husband and new baby.

Esther Carlisle-Doele - Esther was born at Moton Field, home of the Tuskegee Airmen, in Tuskegee, Alabama and was twice a graduate of Tuskegee University with a BS and MS in Biology. She lives with her husband and two daughters in Atlanta, where after taking time off from a career in microbiology research at Morehouse School of Medicine she volunteers for many area non-profits including the Mountaintop Camp, Tres Dias of North Georgia, the Girl Scouts of Greater Atlanta, the Atlanta International School, the Susan G. Komen Foundation, the American Cancer Society, The National Kidney Foundation, and the Alzheimer’s Association…to name a few. She is excited and honored to serve on the Music In Common Board of Directors and help advance the organization’s mission.

Rabbi-Cantor Marcia Tilchin is the founder and spiritual leader of the Jewish Collaborative of Orange County (JCoOC), a non-profit organization created to help OC Jewish residents and their families connect their personal passions with Judaism.  Marcia received her cantorial degree from the Jewish Theological Seminary of America in New York City and rabbinic ordination from the Ziegler School of Rabbinic Studies at the American Jewish University in Los Angeles.  Between 1998-2015 Marcia served Conservative congregations in Upper Nyack, New York and Tustin, California before launching her own initiatives. Rabbi Tilchin’s commitment to helping people find what is meaningful to them within Judaism is a signature of her compassion-driven spiritual leadership, service and interfaith engagement.  Currently Marcia sits on the board of the Interfaith Youth Alliance (IYA) and is the Executive Director of the Orange County Alliance for Just Change (OCAJC).  She and Professor Scott Spitzer learn important lessons daily from their children, Avi, Sheindl and Yaira, all of whom are Music In Common program participants and alumni. Music in Common, at its core, embodies three key ingredients necessary for fostering a more harmonious world:  face-to-face relationship-building, collaboration through the universal language of music, and learning together.  Marcia is excited to help this program grow in southern California and better understand how the principals might be used with other groups in need of bridge building.

Amr Moussa was born in Syria and is a student at UC San Diego studying Biology in the pursuit of becoming a physician. He participated in his first JAMMS program in 2015 and has been actively involved with Music In Common ever since. “I believe that any group can come together and create something beautiful regardless of their differences in background. That is why I love Music In Common and choose to be a part of it.” Amr is excited to serve as the newest and youngest member of the MIC Board.